At the center of your camp and the enemies', the player's Statue stands tall as a primary structure for your base. The point of the game isn't to slaughter the enemies army, but rather to destroy the Statue, as it is the win condition.

Aside from being a matter of life or death, the Statue is a sacred monument for Miners and Chomplers to pray at. When they kneel at its base, they gather Mana for more advanced troops. 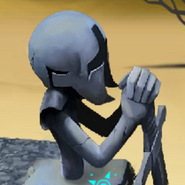 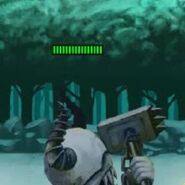 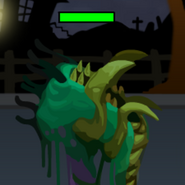 The statue has a very abundant amount of health. It should be able to take sustained damage for a long time, as long as a well kept army is managing to defend it. However, this health cannot be restored through any conventional means(The only way of restoring health is Statue Turret)

After all health bars have been depleted, the Statue will crumble to the ground, and the player who loses their statue loses the match. (It will also fall to the ground if the player Surrenders)

Miners can be ordered to go to the statue and pray instead of mine. Praying gathers Mana for the player to use on technologies and more skillful soldiers.

It can also be used as a tank building to tank hits for weak units like Archidons and Swordwrath during early game or when the enemy has broken your lines of defense and marched into your base. However, this is usually a last resort, as Miner Walls or other tanking units are usually much more effective and versatile as a defense.

Statue size is an upgrade which doubles the statue health per level, the size of the statue will also increase, It must be bought by upgrade points and has 3 levels.

In Stick War II: Order Empire, Statue size was changed into resilience, there is only one level and it costs Gold and Mana to research, It doubles the statue health, There will be no change in the Statue size.

Statue crown is an upgrade that Started and increased passive income(Passive collection of Gold),It also added a crown on the top of the statue, It must be bought by upgrade points and has 3 levels.

In Stick War II: Order Empire, Statue crown was changed to passive income, It has 3 levels and requires Gold and Mana to research, There will be no change to the statue.